nPB Banned in My Degreasing Process – How Do I Replace It?

With the recent restrictions on nPB – How do you clean now?
-Joe McChesney

Read the condensed Q&A below and watch our full 10-minute presentation video for in-depth advice from one of our techs: 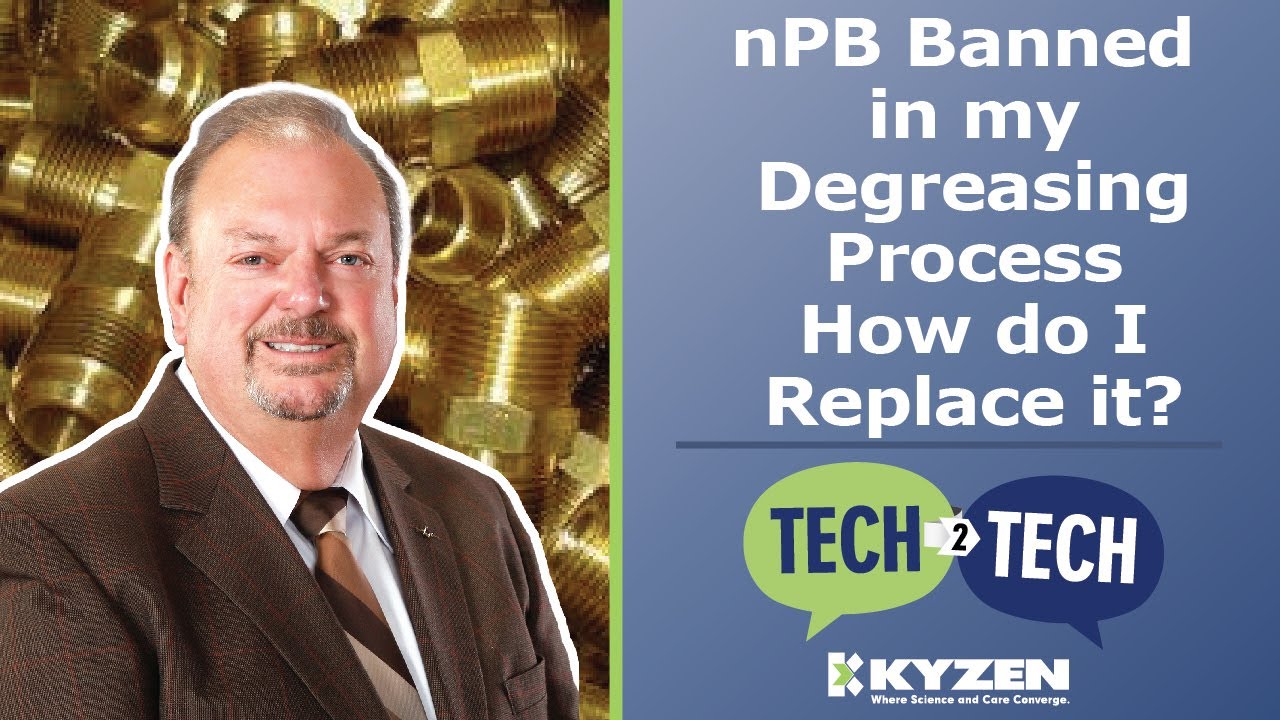 How long do I have before this solvent is banned?
It depends upon the action regarding the EPA. All the comment letters are in from the public, they’ve actually taken the input from the EH&S organizations around the United States. Typically, it’s 1-2 years after the nontechnical evaluation has been sent out, it could be sooner. You have to keep in touch with the EPA rulings and regulations for that particular solvent.

Will my existing degreaser work with new solvents?
Most of the modern degreasers will work with the new solvents on the market. If you have an older generation machine, you may have to look at modifying that or even replacing it for more efficient solvents.

What can you tell us about the discussion to have with customers on the cost of switching over?
The cost on a switch over is an interesting subject because it depends on how you’re going to go. If you’re going to go from one solvent to another solvent, that is the lower cost-effective range, especially if you have a modern degreaser. If you’re going to go from solvent to aqueous, now you’re looking at new equipment and process. With aqueous you have generally larger footprint, more energy consumed, more handling issues. With vacuum degreasing it’s a little smaller footprint. Everything is enclosed inside a small cabinet system that generally much easier to operate. It needs to be looked at from a lot of different perspectives and which solution provides best results.

I can’t use water cleaning process, what are my options?
If you can’t use water for your actual parts being cleaned, you have two options. You can go with traditional solvent that’s being changed out, or you can go with vacuum degreasing applications. Vacuum degreasing offers both polar and nonpolar qualities of removal so it can clean oils as well as water-soluble coolants.

How do vacuum degreasers work?
Vacuum degreasers work fairly easy. Dirty parts are put inside the chamber, that chamber is sealed, a vacuum is pulled on the system to take the air out of the unit, and at that point the parts are subjected to multiple processes they can be sprayed in air with clean solvent, they can be immersed in solvent. During immersion stage, you have ultrasonics or 360-degree rotation. You can have preset isolation or rocking motion. They get multiple flushes and basically the final stage would be followed with a hot vacuum drying system that pulls the solvent out of the parts and the parts would then come out clean and dry.

Going from nPB to M6900, what is the % increase in cost? Do you have some examples of successful changeovers?
Although the solvent cost is higher, the machine use about the same amount. If you look at the cost difference, it may be 2-3 times as much to go to a newer grade solvent. However, you get a longer bath life and better cleaning action in generally most cases.

Which solvents do vacuum degreasers use?
Most vacuum degreasers are set up for two types of solvents: one is a modified alcohol that works with both polar and non-polar soils. Second is hydrocarbon solvent that works better with non-polar soils. Most hydrocarbon do not work good with polar soils such as water-soluble coolants because they leave a little bit of residue or spotting on the parts.

I have an older model solvent degreasing system and would like to distill the solvent for longer bath life. Is there a system available to do this?
Yes, there is. You can have external distillation systems ranging from 1 gallon per hour to 600 gallons per hour based on the size of your degreasers. These systems will pull the dirty solvent from your machine and distill it. Only the pure, clean solvent will come back to the degreaser which creates a dilution effect and the degreaser enhances your solvent purity thus your parts be cleaner. As it pulls the dirty solvent out of the system, the soils and contaminants that you were taking off become entrained in the steel bottoms for future disposition.

We have an account with 5 vapor degreasers, 200 liters each, should we recommend having them send parts to be tested?
Yes, I would strongly recommend that when you start looking at changing solvents, always test your parts first. Make sure the compatibility is there and that gives you a good reference point of how clean the parts are and how clean they can be with the new solvents or new aqueous process you’re looking about replacing.

In your personal point of view in replacing nPB, which is better, solvent or water-based?
It depends on the actual production parts that you’re meeting and your motive material handling and QC methods. There’s a lot of issues to be considered. Some places cannot use water, so they must go with solvent, and some places water is a viable alternative. However, you would have to replace the equipment and go through the qualifications. While water is a good cleaning agent with certain chemicals, it does have limitation in regards to compatibility of materials.